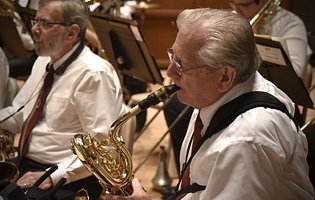 History of the Bands

The origin of the Gem City Bands dates back to the early 1940s, or perhaps even the 1930s, when there was a concert band playing at the Siebenbueger Singing Society. At the same time, there was a concert and marching band at the 313th Machine Gun Battalion Club, located at 20th & Peach Streets, the present site of the Kings Rook.

Around 1950, the 313th Band combined with the existing Siebenbuerger Band and relocated to and was sponsored by the Siebenbuerger Singing Society. The band had several conductors during this time, including Adam Lehner, Joseph
Lehner (Adam's brother), and Hank Russell. The band remained at the Siebenbuerger Club for over 20 years, but because of declining interest and a shrinking membership, it was felt that a new sponsor had to be found.

The band very briefly met at the Millcreek Moose Club. In 1970, an agreement was reached with the East Erie Turners (EET) Club for the band to move there under EET sponsorship. At the Turners, the band had six different conductors, including Hank Russell, Lloyd Johns, Ralph Perkins, Ned Trautman, Gary Peterson, and Tim McKinney. The band played annual spring and fall concerts at the Turners, as well as three summer concerts at the club's outdoor facility, Turnwald. At its peak, and until the 1980s, the band drew 400 people or more for its concerts. At one point, the club even added risers to help accommodate the crowds.

The bands were located at St. Mark's Episcopal Church from 2011 to March 2014, at which time they returned to St. John's Lutheran Church at 2216 Peach Street. St. John's offers a large rehearsal room, several breakout rooms for sectionals, a large storage room to house the band's growing equipment and music library, and an auditorium with a stage for concerts throughout the season.

Both the Concert and Jazz Band present spring and fall concerts at St. John's Church, and each group offers numerous retirement home and community performances throughout the year.

The Jazz Ensemble was formed in 2003 as a smaller, spin-off group
dedicated to performing jazz, big band and swing sounds from all eras. The
17-member Jazz Ensemble has a large repertoire that includes such jazz
greats as Sammy Nestico, Duke Ellington, Count Basie, and Buddy Rich.