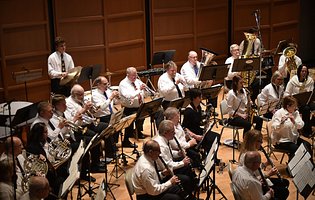 Brent Johnson is currently the director of the McDowell Center for Performing Arts in Erie, PA. His teaching responsibilities include directing the award-winning McDowell High School jazz band and wind ensemble, all performing arts classes (musical theater), piano class and was marching band director from 2010 through 2015 before taking over his current position. Brent leads the high school’s after school theater program that features four major theatrical productions a year. Brent is a graduate of Edinboro University with a degree in music education. Through Edinboro, he also completed a Master’s in Educational Leadership and Principal’s Certification.  Brent has studied conducting with Dr. Gary Grant, Dr. Peter Van den Honert, and Dr.Paula Holcolmb. Brent has played trumpet, conducted the orchestra, and been seen on stage in many shows at the Erie Playhouse. Brent has been the conductor of the Gem City Concert Band since the fall of 2018.

In his free time Brent enjoys spending time with his wife, Leah, and daughters, Addy and Millie. He is also an avid golfer and can be seen hitting the links at Lawrence Park Golf Club.

Brian is on staff for the Mercyhurst University Marching Band, Laker Pride. He has previously guest conducted the IU-9 Junior Band. He also has presented workshops on literature for jazz ensembles, as well as music for solo and ensembles and concert band. He loves teaching all areas of instrumental music, from concert band, jazz ensembles, marching bands, to small ensembles. He has started and directed numerous steel drum ensembles during his teaching career. In his free time, Brian enjoys arranging music, playing trombone in various ensembles and musicals, playing board games and cards and doing woodworking.

Brian and his wife Penny and their dog Jillian live in Erie, PA. They have two grown daughters, Kayla and Nicole, and are the proud grandparents of Sophia, Miles and Emily, who are a large part of their lives.

Joel Hunt is a music theorist, composer, and performer with experience ranging from jazz and pop music to interactive electroacoustic music and algorithmic computer music.

Joel is also an active composer and performer, specializing in algorithmic, interactive, and improvisatory electroacoustic music. As a champion of new music, he has premiered countless new works for saxophone at venues such as the International Computer Music Conference (Athens), Primavera Festival of Contemporary Arts and Digital Media (Santa Barbara), California Electronic Music Exchange Concert Series (Los Angeles), United States Navy Band International Saxophone Symposium (Washington, DC), and the Ethos NewSound Festival of Contemporary Music (Fredonia). As an ensemble player, he has performed at the Roy and Edna Disney/CalArts Theater (Los Angeles) and the Santa Barbara Museum of Art, at conferences held by the North American Saxophone Alliance and the College Band Directors National Association, at the Sigurd M. Rascher Centennial Celebration, at International Jazz Festivals in Rochester and Ellicottville, and has toured throughout the Northeast, California, and China. His compositions have been premiered by the Now Hear Ensemble, Ensemble et cetera, UCSB Contemporary Music Ensemble, and the Fredonia Jazz Ensemble. Joel’s current creative pursuits include recording a collection of newly commissioned works for saxophone and electronics, and recording a set of original compositions for modular analog synthesizer.